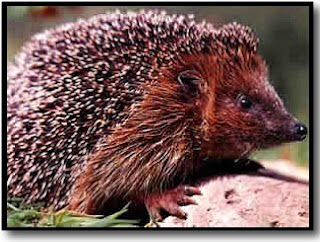 One evening during the summer my neighbour knocked on the door to say he’d found a baby hedgehog on his front drive. As he knew we fed them in our garden he thought we’d know what to do about it!


When we went to investigate, we found the little fellow wandering around on the front lawn, disorientated and unsteady on his feet. We decided the best thing to do was ‘overnight’ him in the hedgehog house we have in our garden. In the morning we could call the local wildlife hospital for advice. So I carefully tucked him up in some fresh hay, put down some food and water and we kept our fingers crossed that he’d be okay until the next morning.


During the night I woke up remembering that I’d recently read an article in the local newspaper about a new (Brackley Hogwatch) which had just opened nearby.  Early the next morning I phoned their emergency helpline and within seconds, Andrew, (the hospital’s founder) answered. After a brief discussion  he said it sounded like the hedgehog was an orphan and probably only 3 or 4 weeks old - so the sooner he picked him up the better.


Sadly, when he arrived a short while later, the little hoglet was curled up in a tiny ball and appeared to be lifeless. Andrew explained that even though we’d done all the right things, babies can deteriorate very rapidly and the quicker he could get him on a heated pad and start syringe feeding him goats’ milk the better his chances of survival.


I told him we were going away on holiday the next morning but we would really love to know how he was getting on when we got back. He explained that they always like to return ‘patients’ to their original surroundings so he would be in touch again in a few weeks.


Sure enough a few days after arriving home we had a letter through the post saying ‘Bill’ (the name they’d given him!) had survived and was now 115g in weight and would soon be ready to "come home". Also included with the letter was a copy of his ‘hospital record’ charting his weekly progress and highlighting his excellent nesting skills and very healthy appetite!


So, the following evening we arranged for ‘Bill’ to be released back into our garden. Andrew explained that although he would remember his surroundings we may not see him again for a while as hedgehogs are nomadic and can travel up to 4 miles a night in search of food and a mate.  To make sure we’d recognise him when he did return he’d painted some white nail varnish onto some of his spikes.


It’s been several weeks now since Bill’s release and as yet we’ve not seen him amongst the several other hedgehogs that visit us each evening. However, I’m confident that one day when we look out the window one very special little hedgehog will be their enjoying his evening meal...