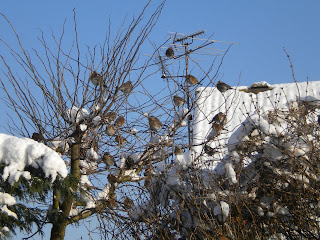 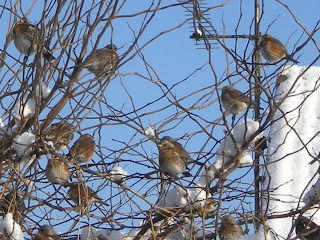 A few days ago a flock of about twenty Redwings came into the garden and within a few hours devoured all the berries on our cotoneaster bushes. This isn’t the first time they’ve visited - according to my ‘nature diary’ my very first sighting of them was on a frosty morning in January 2009.


I remember thinking at the time that they looked like thrushes, but then I noticed they had red markings on their wings so I looked them up in my Bird Guide: it describes them as a small sociable thrush with a bold head pattern and distinctive rusty-red under wings and flanks. Apparently, they are winter visitors from the Taiga forests of the far north. This stretches from western to eastern and has a winter temperature of -50. They forage in flocks for berries (often with fieldfares) and visit large gardens for food.


That first year there wasn’t a flock of them, just two or three, and after eating lots of berries they disappeared as quickly as they’d arrived; Returning, very briefly, a few weeks later in February.


The following year, on the 7 January 2010, once again, a few arrived in the garden and began feasting on the berries. I remember enjoying watching them and expecting them to disappear in a few days like they had done the previous year - so, imagine my surprise when the next day I looked out of the dining room window and saw a flock of about fifty in the garden!


Although it was a bitterly cold day, with a heavy layer of snow on the ground (it was one of the coldest winters in the UK for 30 years) the sun was shining and as they settled down to rest on the bushes, their feathers puffed up to keep out the cold, they looked stunningly beautiful with their freckled chest’s and red wings.


Since then they’ve returned to our garden each year - but, sadly, I’ve never seen as many as that first sighting in 2010. I’m not sure if that’s significant in anyway - if it means the population is declining or simply that they are going elsewhere. But in the bleak midwinter days of January, when there seems little to look forward too, and spring seems so far away, I really look forward to their return.