King of the Fishers 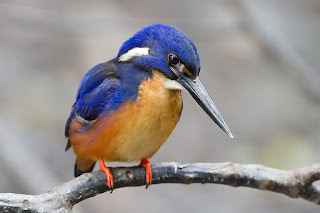 Apparently there are eighty seven different types of kingfisher in the world. They are present in every continent except .  Practically all of them are bright and iridescent: colours range from blue, to purple, red, green, rose-pink, pistachio, orange and even black and white.   Not all of them, however, are the ‘fishing’ kingfishers we have in the quite a few are ground feeding birds. To quote the nature writer, Simon Barnes, “they seem to have been created when God was in one of his silly moods; a virtuoso bit of creation.”


The first time I saw a kingfisher I was about seven years old and on a boat on the river with my father. It was a warm sunny afternoon and earlier in the day the family had enjoyed a picnic on the riverbank.


I say I ‘saw’ a kingfisher, but as with most sightings of this beautiful bird all I actually remember was seeing a glimpse, a streak of electric blue, turquoise and chestnut red as it flew past us up the river and into the distance. What I do remember though is the great excitement this brief glimpse caused with my father shouting ‘kingfisher’ and waving frantically up the river to the other members of the family who were sitting on the riverbank.


Up until recently (probably like most people) I could count the number of kingfisher sightings I’ve had over the years on the fingers of one hand. However, since I’ve started a regular walk along a stretch of a slow flowing river, often where they are found, I’ve been fortunate to have had several good sightings.


The most recent one happened several weeks ago, on a cold autumnal day. I was standing on a wooden bridge that crosses over the river, watching the steady flow of water and daydreaming when all of a sudden that familiar flash of colour shot past me, circled a large old oak tree and flew back down the river in the direction it had appeared. The whole event probably only lasted a few seconds, but it was my most memorable sighting to date.

In the , kingfishers breed in their first year and have 2-3 broods in quick succession; the first clutch usually appears in late March or early April. Each tiny chick can eat 12-18 fish a day and when they leave the nest at 24-25 days the parents only continue to feed them for the next four days before driving them out of their territory and starting their next brood.  Sadly, half the fledglings don’t survive for more than a week or two and very few last more than one breeding season. If you put all these facts together, catching a glimpse of these pretty little birds really does become a very special treat indeed.