The Running Hare - The Secret Life of Farmland

I’ve just finished reading The Running Hare – The Secret Life of Farmland by John Lewis-Stempel. He was the winner of the Thwaites Wainwright Prize in 2015 for his beautifully written nature book, Meadowland (see blog post dated 2016).


This thought provoking and insightful book is a close-up and intimate study of the plants and animals that live in and under plough land. The book is also delightfully illustrated by Micaela Alcaino.


It is a history of the field, the story of landscape, people who ploughed the field, their lives, language, religion and food.  It is also a story of loss – the quiet fields and countryside which no longer sing with the sound of birdsong and the animals once abundant in the fields and hedges now gone. In a poignant sentence, early on in the book, he writes ‘we are all to blame, farmer, supermarket, politician, me and you.’ A sad reflection of our time and a warning for the future that we need to act now, if, he says ‘we want the birds back’.


With this in mind, he wanted to plough and husband a conventionally farmed arable field in the old-fashioned, chemical-free way – and make it into a traditional wheatfield.  He hoped to bring back the flowers and wildlife that have almost disappeared from British ploughfields, like corncockle, corn marigold, cornflower, grey partridges, quail, harvest mice (and my favourite) hares.


He eventually finds a four-acre arable field called ‘Flinders’, which he can only have for one year. In January, he ships in some of his sheep to eat the kale that is in the field, and so the process begins. Finally, in March he ploughs ‘Flinders’ with his tractor – The Little Grey Fergie. He notes how difficult it is and sees why the ploughman was called the king of labourers.


Over the month’s he sows the wildflowers he has bought, and watches as wildlife returns to the field. The hares reappear and soon enough leverets arrive. Flinders gradually becomes full of colour and life, while the nearby landscape (in contrast) remains as monotone in summer as it is in winter.


In July Flinders is full of bees buzzing amongst the mass of poppies, corn marigold, corn chamomile, cornflowers and self-seeded indigo wild pansies and scarlet pimpernel. It’s a sad fact that twenty-three species of bees and flower-visiting wasps have become extinct in the last 160 years.


In late August, he is ready to harvest – he notes nature only gives a couple of days between the crop that is ideally ripe, and one that is deteriorating.


He uses an Alvan reaper-binder that never falters, never seizes, and leaves a perfect sheaf every time. They are left in a row, making stacking them into a ‘stook’ easier. There are 880 sheaves in total. They are put in ‘stooks’ of six sheaves leaning upright against each other in a tunnel – so the rain runs off them but the sand and wind will catch them. In doing this the ‘weed’ in the crop will die off. He then decides to have a go at hand threshing, for some homemade bread, so buys a flail – an ancient instrument to part the grain from the husk. He manages to collect three full bags.


At the end of the year, after the entire process is complete, he remarks that…one field, just one field made a difference – wildlife thrived on Flinders for the year and the wildflowers and wheatfield were both a success. If we had a thousand fields... 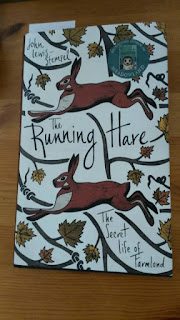