Walking in my local wood the other day, I heard the unmistakable high-pitched ‘tssirrp’ song of the Long-tailed Tit. On closer inspection, I found a small family group, with their distinctive pinkish-brown fluffy bodies, moving through the trees.

One of them, a juvenile (so not yet pink, but with grey-black cheeks) looked at me from the safety of his perch high up in the tree branches. Maybe, I was the first human he had come across; he didn’t seem that concerned - just a little inquisitive as he stared at me while other members of his family busied themselves around him.

It was a particularly lovely sight to see these cute little birds in this relatively young ‘Millennium Wood’, established by The Woodland Trust in 2000. The native broadleaf’s are now over thirty feet tall, and over the last few years it’s been noticeable that it’s now matured enough for the local wildlife to start moving in and setting up home.

Good news also then, that according to the RSPB 2011 Bird Survey (which says that small birds can be particularly badly affected by harsh winters), the Long-tailed Tit has bounced back with sightings now having increased by a third. 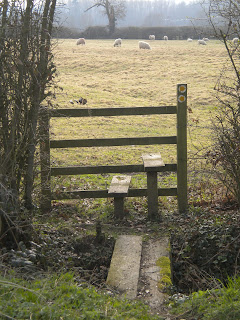 As this close knit family disappeared across the tree tops, I found myself hoping that they too would deem it worthy of setting up residency; so I can be lucky enough to see a lot more of these adorable little birds in the future.
Posted by Jill at 04:03